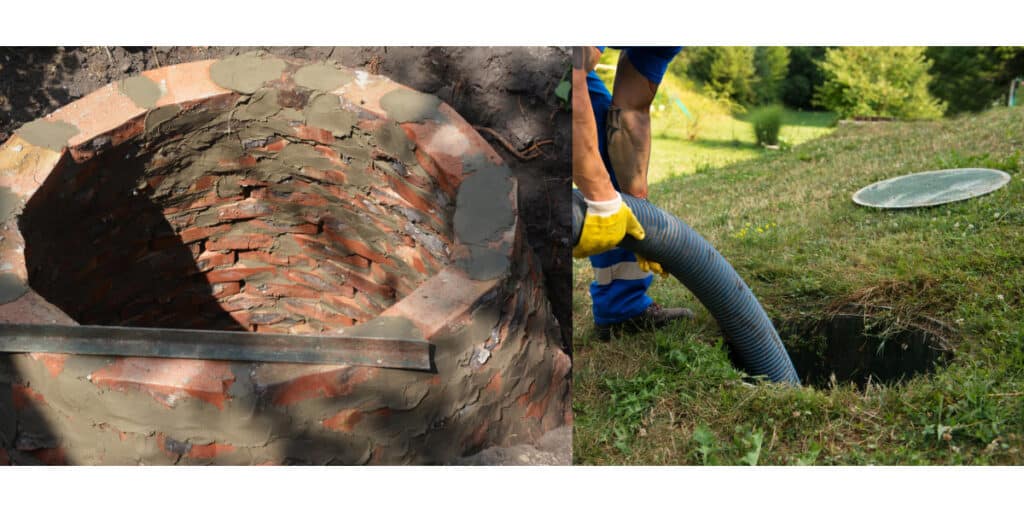 The cesspool vs septic tank debate is a great question. When you are buying a house, there are things you don’t consider, the difference between a cesspool vs a septic tank won’t likely come up in conversation, but if you are looking at a house that has one or the other, it’s good to know the difference. Here is what you need to know about cesspools or septic tank systems and which is better.

It’s important to know that these systems are in place when there is no sewer hook-up available. This means that all of the water from your sinks, toilets and washing machines ends up in these types of systems. This means you need to be careful about what goes down your drain when you have either of these sewer systems.

What is a cesspool?

What is a cesspool? A cesspool is a round or cylinder walled cement tank that is buried in the ground. A cesspool consists of a pit where all of the liquids and solids waste go into.  Everything that goes down a drain from a household end up in the cesspool.

From there, the solids settle at the bottom. The wastewater is leached into the soil through the holes in the walls of the concrete cylinder. While the sludge layer remains at the bottom of the cesspool.

This is an older type of sewage disposal system. Its origins can be traced to the Roman empire. They are banned in many states but commonplace before septic tanks started to show up in the early part of the 1900s. They are common in places like Hawaii. 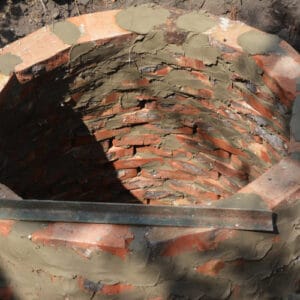 What is a septic tank system?

A septic tank system serves as a wastewater treatment system for your house.  They can be made from concrete, polyethylene (hard plastic), or fiberglass.  The location of a septic tank is buried underground with an access point sticking out of the ground.

The tank accumulates all of the liquids and waste from a household. Just like a cesspool, if it goes down a drain, it passes through your tank. There are two parts of the tank in a septic system. All of the water and waste of your house goes into the first part of the tank via the inlet pipe. Then the solids break down from the enzymes and bacteria in the tank.

The liquid is then removed from the tank periodically via an internal or external pump. The pump will push the wastewater into the leach field returning the water to the ground to be treated before returning to the water table. 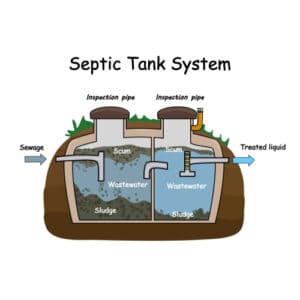 What is a leach field?

A leach field, or drain field, is a series of pipes buried in the ground that have holes in them for the water to go out of and filter into the ground.

What is a holding tank?

A holding tank is like a septic tank but without the outflow valve. All of the water flows into the tank (and the waste) and gathers in the tank. The tank is then pumped to remove its contents. Unlike a septic tank the water is not treated and returned to the soil via a drain field.

What is the difference between a cesspool vs septic tank?

The difference between septic tanks and cesspools is that one is better for the environment. A cesspool can contaminate your water source if it is close to your pump. In many states they have regulations in place to prevent future cesspools being installed and instead opting for the safer septic tank system. Here are the factors to consider when deciding.

A septic system is a waste water treatment system which distributes the water into a wider area.  They are better at treating the water. The bacteria breaks down the scum in the tank and is able to return the water to the water table after this treatment process. Whereas a cesspool doesn’t distribute the water it just leaches out into the ground surround it.

Septic tanks are also a closed unit. They take in the water flow of the house, treat it and clean it. As it fills you will need to get it pumped but that is the extent of their management, unless you have septic tank problems.

Here is everything you need to know about septic tank pumping and cleaning.

A cesspool cleaning can be done when it fills up, but it may be hard to locate, whereas when a septic tank is full it needs to be pumped. This can be every 1 to 5 years depending on the tank and usage.

Septic tank problems can arise but it is usually something to do with the pump or being clogged. These are usually easily remedied.  Older tanks can also develop cracks. You may have heard about septic tank smells, but that is rare and indicates there is something wrong with the system. Because they are closed there should be no smell.

Cesspool problems have been known to occur. They can collapse. If the sludge builds up it will block the holes causing a backup in the yard.  Additionally,  an open cesspool can be a risk for your family in several different ways. In some places if you have to pump the cesspool more than twice in a year it’s considered obsolete and needs to be replaced.

How long do septic tanks last?

Most septic tanks last about 20-30 years before they need to be replaced.

Which is better septic tank versus cesspool?

Septic systems win hands down. That doesn’t mean you should avoid the a house with a cesspool. But if you are choosing between the two, the septic system is the better system.

You can replace a cesspool with a newer septic system. You will need to contact your local plumbers or septic professionals to see what the cost will be but it can be done. Making the switch can be better for the environment and for your immediate surrounding area.

That said if you are building a dream house, or you have a choice I would stay away from cesspools and opt for the septic system.

Septic Tank Vs Sewer: What is the difference?