What is a septic tank?

A septic tank is a watertight chamber made of concrete, fiberglass, or plastic. It is a wastewater treatment container designed to hold sewage from a home or business. The tank is typically underground and connected to a building’s sewage system. Septic tanks can vary in size, but most have a capacity of 1,000 to 3,000 gallons.

How does a septic tank work?

A septic tank is a key part of most modern homes’ plumbing systems. It’s a large, watertight chamber that is buried underground and connected to your home’s sewer line. When wastewater enters the septic tank, it naturally separates into three layers: solids, scum, and effluent. Septic tanks work by allowing sewage from a house to flow into the tank for processing.

The solids sink to the bottom of the tank where they are broken down by anaerobic bacteria. The scum floats to the top, while the effluent flows out of the tank and into the leach field/drain field. Over time, the volume of solids in the tank increases, and if these aren’t removed regularly, they can clog the system and cause it to fail.

The liquids in the septic tank also undergo treatment. The bacteria present in the sewage help to break down the organic matter in the liquids. This process removes harmful contaminants and reduces the volume of liquid wastewater that flows into the leach field which is then dispersed back in the ground via perforated pipes in the ground.

Septic tanks typically need to be pumped every three to five years in order to remove the accumulated solids. Proper maintenance of septic tanks is essential for preventing pollution and protecting public health.

An underground septic tank is a watertight chamber used to process and store sewage. The tank is typically underground and it has an inlet and outlet pipes. The single inlet pipe brings sewage into the tank from the house, and the outlet pipe carries effluent away from the tank to the drain field.

The tank also has a baffle or screen that helps to separate solid waste from liquid effluent. Once the sewage enters the tank, it is processed by bacteria. The bacteria break down the sewage into sludge and effluent. The sludge settles at the bottom of the tank, while the effluent (grey water) flows out of the tank through the outlet pipe.

The tank is a simple but effective way to treat sewage. It is an important part of many homes and businesses, and it plays a vital role in protecting our environment. 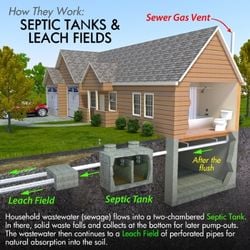 What is the purpose of a septic tank?

The purpose of the septic tank is to gather a household’s liquid and solid waste and process it like a small-scale sewage treatment system. Septic systems are used in areas where there is no connection to a centralized sewage system.

What are the advantages of having a septic tank?

A septic tank is a highly efficient and environmentally-friendly way to treat household wastewater. Unlike a municipal sewer system, which relies on chemicals and energy-intensive pumps to move water, a septic tank relies on gravity to separate solid and liquid waste.

The solids are broken down by bacteria, while the liquids are percolated into the ground. As a result, septic tanks require little energy to operate and generate no pollutants.

Additionally, they are highly resilient to power outages and other disruptions. Septic tanks are also very cost-effective, as they can last for decades with minimal maintenance.

In contrast, municipal sewer systems must be regularly repaired and replaced, leading to high costs for taxpayers. As more homeowners become aware of the benefits of septic tanks, they are increasingly choosing to install them on their property.

What are the disadvantages of having a septic tank?

Despite their many advantages, septic tanks do have some disadvantages. One is that they require regular maintenance in order to function properly. The tank must be pumped out every three to five years, and the leach field (also knowns as a drain field) needs to be inspected and cleaned as needed. Septic tanks can also be quite expensive to install, and they take up a fair amount of space.

One of the biggest potential issues is that septic tanks can leak, causing sewage to contaminate groundwater supplies. If the tank is not properly maintained, it can overflow, releasing untreated sewage into the environment or back into your house.

In addition, if they are not maintained properly, they can leak pollutants into the groundwater or cause backups in the home. As a result, it is important to be aware of the potential drawbacks of septic tanks before making the decision to install one.

What does a septic system mean when buying a house?

When buying a house, septic tank systems mean that the property has a private sewage system. This is different from a public sewer system, which is managed by the city or county.

A septic system has a tank that stores sewage from the home. The tank is usually buried underground. Wastewater from the home flows into the tank. The tank is designed to allow solids to settle to the bottom, while liquids flow out into a leach field. The leach field is a series of trenches filled with gravel.

The gravel helps to filter out impurities from the water before it returns to the groundwater supply. A septic system requires regular maintenance, but it can be a more economical option than a public sewer system.

If you’re in the market for a new home, you may come across the term “septic.” But what does septic mean, and is it something you should be concerned about?

Simply put, a septic system is a way of treating and disposing of wastewater from your home. Septic systems are most commonly used in rural areas where there is no central sewer system.

While septic systems can be a bit more expensive to maintain than central sewer lines, they are generally very reliable. As long as you have your septic system regularly inspected and pumped, it should serve you well for many years.

So, if you’re considering a home with a septic system, don’t let the term scare you off. With a little bit of maintenance, a septic system can be a great way to dispose of wastewater.

What are the signs that your septic tank is full?

Any home with a septic system has a tank that needs to be pumped out every few years, depending on the size of the tank and the number of occupants in the home. However, many homeowners wait until they start having problems before they think about pumping out their septic tank.

If you’re not sure how often your septic tank needs to be pumped, there are a few signs to watch for that indicate it’s time for a pump-out.

For example, if your toilet starts flushing more slowly or backs up when you flush, that’s a sign that your septic tank is full and needs to be emptied.

You may also notice water pooling in your yard near the location of your septic tank, which is another indicator that it’s time for a pump-out. If you see any of these signs, don’t delay – call a septic company to have your tank pumped as soon as possible.

Is a septic tank hard to maintain?

No. Maintaining a septic tank is not as difficult as some people might think. In fact, with a little care and attention, a septic tank can last for many years without any problems.

The key to keeping a septic tank in good condition is to ensure that it is regularly cleaned and pumped out. This will help to prevent the build-up of sludge and scum, which can eventually lead to the tank becoming blocked.

Additionally, it is important to avoid using too much water, as this can also cause problems. By following these simple tips, you can help to keep your septic tank in good working order for many years to come.

What is the difference between septic tanks and septic systems?

A septic tank is a watertight chamber made of concrete, fiberglass, or plastic. Its purpose is to hold sewage long enough to allow solids to settle out before dispersing effluent (liquid waste) into a leach field.

A septic system is composed of a septic tank and a leach field. It is the most common on-site sewage facility in the United States. Most homes that are not connected to a central sewer system use a septic tank/septic system. Wastewater from toilets, showers, baths, laundry, and sinks flows through underground pipes to the septic tank.

Septic systems are usually installed where houses are not served by municipal sewer lines. A big advantage of having your own septic system is that you will not have a monthly bill for sewage treatment.

However, you will be responsible for maintaining your septic tank and leach field so that they will continue to operate properly and not pollute the environment or endanger public health.

How does the inside of a septic tank work?

Every time you flush the toilet or wash something down the drain, that water has to go somewhere. In many homes, that water goes into a septic tank. Septic tanks are large underground tanks that store sewage until it can be treated. Most septic tanks have two chambers: the first chamber stores the sewage, and the second chamber treats the sewage before it is released back into the environment.

The first chamber of the septic tank is where the sewage enters. This chamber is designed to slow down the flow of water, which gives solids time to settle to the bottom of the tank. The solids that settle at the bottom of the tank are broken down by bacteria, and this process helps to reduce the amount of solid waste in the sewage. The liquid waste then flows into the second chamber of the septic tank, where it is treated before being released back into the environment.

The inside of a septic tank is a surprisingly simple but effective way to treat sewage. By using two chambers, solids can be broken down and liquids can be treated before they are released back into nature. Septic tanks are a key part of many homes’ plumbing systems, and they help to keep our environment clean.

What are conventional septic system issues?

Common septic system issues include clogged pipes, leaks, and tank failures. In some cases, these problems can be caused by improper maintenance or the use of incompatible chemicals.

Other times, they may result from faulty installation or poor design. Regardless of the cause, septic system issues can be a major inconvenience and cause significant environmental damage if left unchecked.

Related: Septic Tank Vs. Sewer: What is the difference?