When you are building a home or remodeling a room, there are countless decisions you have to make. Some of them are major like the type of flooring you plan to install or how you want the layout of the room to be. Others, however, are much easier to overlook. One decision that you probably have not given much thought to before is the height of the shower head. When it comes time to make this decision, you might be left wondering “What is the standard shower head height?” This article will answer that question and provide you with some additional elements to take into consideration when deciding on the ideal shower head height in your bathroom.

What is the standard shower head height? 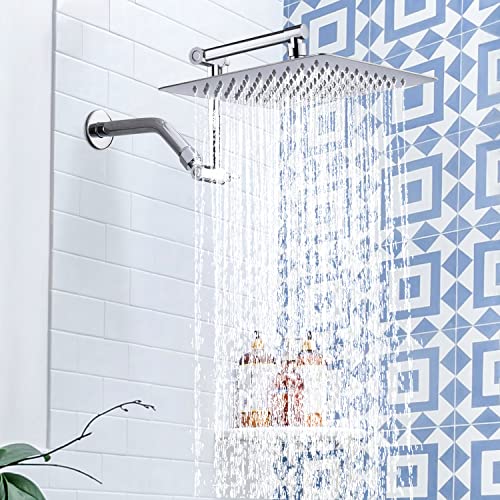 The industry standard shower head height is 80 inches. The measurement should be taken from the shower floor to the vertical center of the shower arm, or the point where it meets the wall.

This measurement takes into consideration the average height of people. However, you are not restricted to installing the shower head at this height. Your space and the height of the users may dictate a change in the installation height.

Ideally, the shower head should be two to three inches higher than the tallest person who will use it. However, keep in mind that if you install the shower head too high, the various water spray patterns that may be available might not be fully enjoyed.

If you opt to install the shower head lower than the industry standard height, be aware that this may negatively affect your home’s resale value or any guests that use the shower. While the lower shower head height may work for you, it may not be suitable for others. This is one reason why handheld showerheads are so popular.

Related: Are all shower heads universal?

When deciding the right shower head height in your home, there are other factors to consider beyond just the standard installation height.

Height of the tallest person

If someone in your household is taller than 6′ 6″, a shower head height of 80 inches will probably not be comfortable to use. Instead, the shower head may need to be higher on the wall. Alternatively, a different type of shower head could be used for added usability without having to move the shower head’s height.

The type of shower head makes a difference in the optimal height as well. If you prefer the shower head height to be higher but cannot do so because of structural limitations in the bathroom, consider using an alternative type of shower head. While custom options are available, they may not be necessary. 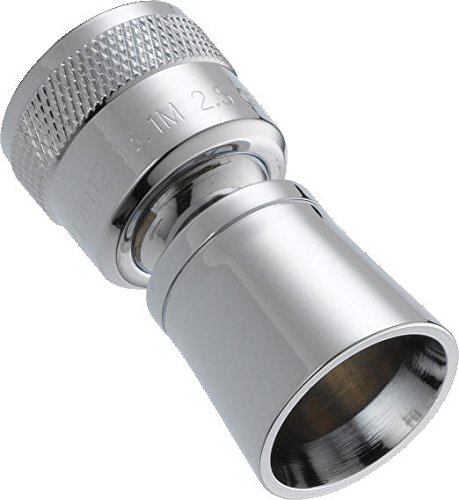 This is the traditional type of shower head. It is inexpensive, can be easily installed, and are simple to attach to the existing shower valve. 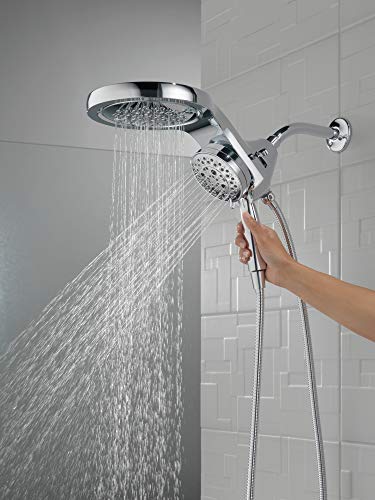 With this type of shower head, the installed height is less important because a person can remove the shower head from the wall to use it. If people of vastly different heights will share a shower, this is a great option to consider.

On a handheld shower head, the shower arm attaches to the base. There is a long hose, so you can easily remove the shower head from the base and maneuver it around you. Typically the hose is three to six feet long.

If a user wants a traditional shower head experience, he or she can leave the shower arm in place and treat it like a normal shower head. Some of the handheld shower heads have a fixed wall mount while others use a sliding bar that allows the shower head’s height to be adjusted up or down.

When you are installing a handheld shower head, be sure to choose a height where the shower head can easily be grabbed by those who will use it. 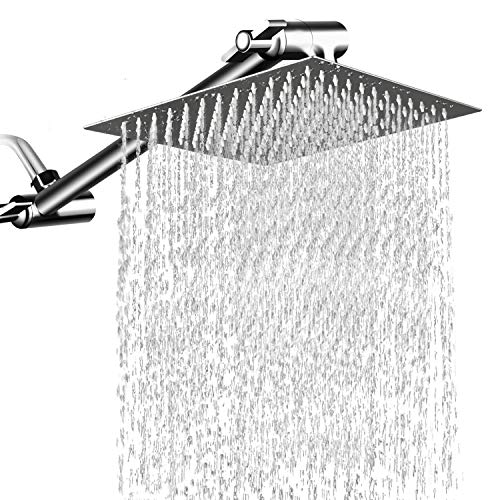 This flat type of shower head spreads water out over a larger area. This is a wonderful option for tall people. As the name implies, a rain shower head imitates the feel of rainfall and provides a spa like experience in your home.

If you have a low ceiling in your bathroom or a small shower, this can be a great option. The water flows downward from overhead, splashing directly on your head, which means that the water is not sprayed directly at the shower door. This often leads to less water spraying or leaking onto the bathroom floor.

Rain shower heads are often installed around 84 inches above the shower floor. If you have people of vastly different heights using the same shower, this option may be just what you are looking for. 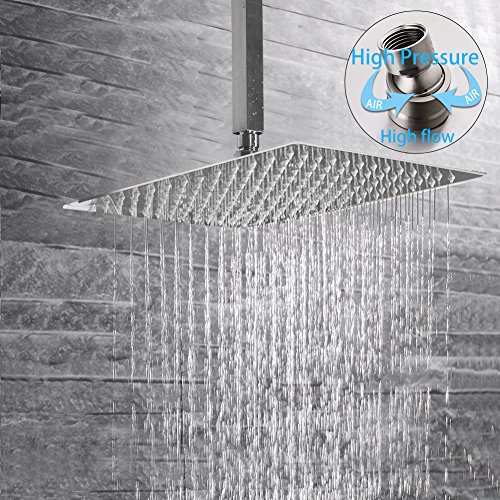 As indicated by the name, a ceiling shower head is attached to the ceiling. This means that as long as the tallest person can fit inside the shower, the shower head will work. The full shower space it utilized and it works for the widest array of people. 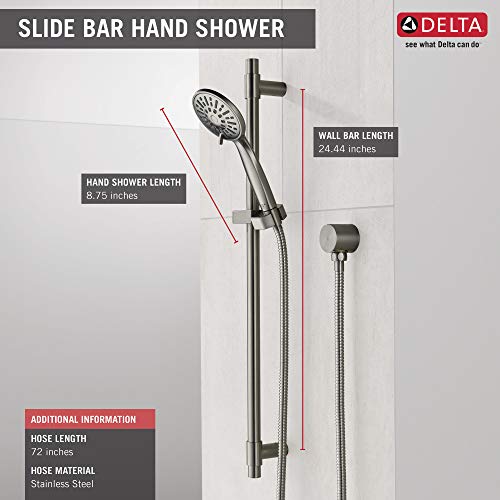 With this type of shower head, the user can adjust the hight by moving it along the bar. Many sliding bar shower heads are also handheld models, allowing for greater flexibility of usage. You can also control the water pressure level too for added enjoyment.

If you want to adjust the height, just slide it to the desired height. This option allows for greater flexibility without needing to move plumbing. 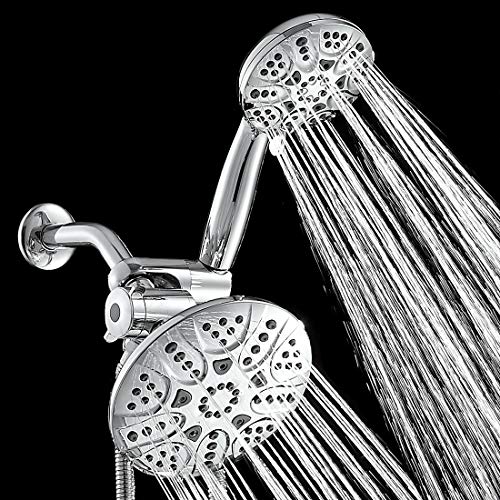 If you cannot decide what type of shower head you want or need vastly different heights, consider installing dual shower heads. With this type, different shower heads are placed on different walls in the shower.

For example, you may choose to install a traditional single spray shower head at 80 inches on one wall and an adjustable handheld shower head on the opposite wall. Both shower heads are wall mounted but they go on different walls allowing for different options within the same shower. 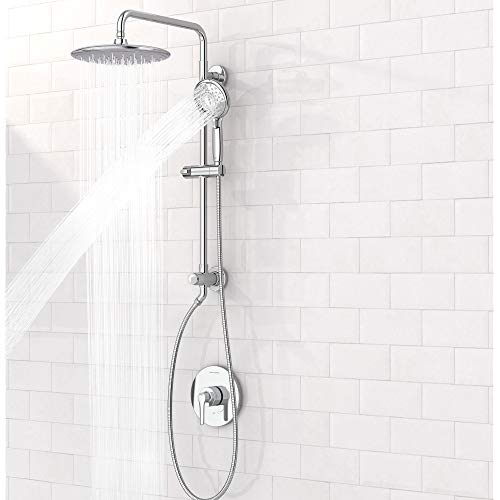 Typically combo showers are controlled by the same shower valves with a level to change between the two types of shower heads. There are some combo options that will allow both heads to be used at one time. However, this typically results in a reduced amount of water pressure.

In addition to the showerhead, there are other elements in the shower to consider too. 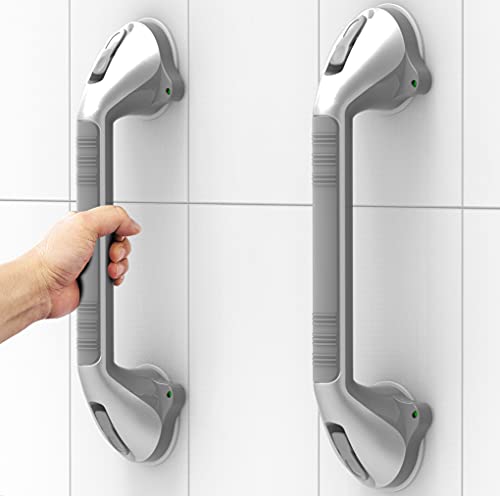 Shower grab bars come in different styles including straight bars and wavy bars. Some can even hold other shower items in them.

Grab bars are excellent additions for people who are worried about slipping in the shower. They can provide some extra stability and help people, especially the elderly, feel more comfortable in the shower. 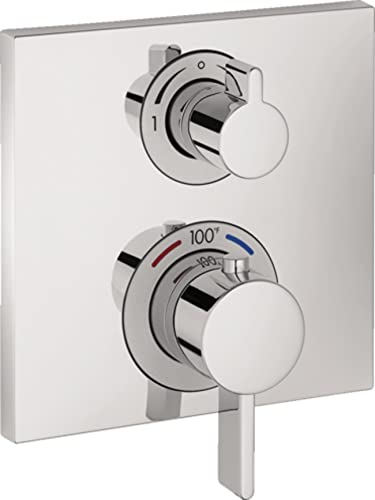 The height of the shower controls can also affect the functionality of your shower. Getting doused with hot or cold water is not fun, so you want to be sure you can operate the controls without being exposed to a direct hit of the water. The controls should be easy to reach and located in a strategic position within the shower.

Optimally, shower controls will be installed 40 to 50 inches above the shower floor. If you are designing a seated shower, the controls can be lowered slightly. Decisions about where to place the shower controls are impacted by your personal preference, shower design style, and the existing plumbing.

If the shower enclosure goes all the way to the ceiling, you need to ensure that you have proper ventilation in your bathroom. Otherwise, there is a risk of mold and mildew forming due to the steam and moisture from the shower. Shower doors are often glass and the standard shower door height should be tall enough to keep the water in without trapping moisture unnecessarily.

The size of your shower space will also affect the perfect shower head height and style as well. There needs to be sufficient room to move around in the shower as well as move your arms without hitting the shower door or wall. The shower pan should be installed well and align with the plumbing to ensure good drainage of the water.

Modifying the height of your current shower head

Perhaps you just bought a new house and, after the first night, realized that the shower head height will not work for you. This may cause you to wonder what you can do to adjust the height. The answer will vary based on a few different factors.

One, what is the set up of your shower like? Do you have sufficient wall space to potentially move the shower head higher? If not, you will need to consider alternative types of shower heads to solve your shower head height dilemma.

Another important factor to consider if where the plumbing is located in your shower. This will impact where you can install a shower head. It is possible to hire a contractor to move the plumbing, but this can get very expensive if you are just wanting your shower head height raised a little.

If you plan to change the type of shower head you have, where the plumbing is located will make a big difference. For example, you may not be able to install a rain shower head without a major plumbing overhaul.

How to accommodate a variety of heights

You may find that the best shower head height is vastly different for people using the same shower. If this is the case, instead of having a fixed shower head, you can install an adjustable shower head so that everyone can shower comfortably.

If you choose this option, you will be able to change the shower head’s height and position. This replaces the existing shower arm.

This is an affordable solution to the shower head height dilemma. The swivel ball lowers the height and can be easily attached to the adapter, allowing the shower to work for people of various heights.

These are easy to install and do not require a lot of equipment. As such, they are not only affordable but convenient too.

Standard Shower Rod Size: Types and Styles For Your Bathroom

Shower Curtain Sizes: Everything For Setting Up Your Shower

How to Make Shower Water Hotter

Why Does My Shower Squeal?