It’s so frustrating when you look around and see (what seems like) everyone you know buying a home and you’re left there wondering, how can they afford to do this? Houses are expensive and it’s hard enough to save enough money for a down payment, let alone making the actual mortgage payments and cost of living once you’ve actually purchased the home.

How does everyone else do it?

Let’s look at a few possibilities:

There are still people out there who are very frugal and have been their whole lives. These are the people who can religiously bring their lunch to work, don’t spend their money on drinks at the bar, and avoid their morning Starbucks coffee every day.

When someone has the discipline to be frugal and systematic with their money, the savings over long periods of time can be staggering. Although I’ve listed this as the number one possibility, this definitely doesn’t represent the majority.

This is a very select few and probably not the ones that you’re wondering about. The people who are really great with their money, are usually the same people you look at and think “well it makes sense that they can afford it, they never spend money on anything.”

So, what about the rest of the people who bought houses?

They’re comfortable being in more debt than you:

Some people carry no stress when it comes to being in huge amounts of debt. While for others, it’s not even an option.

Banks are generally willing to lend more than the average person should have as a mortgage, which is a whole other blog post (see why should use a mortgage broker). However, you shouldn’t dismiss the reservations you have about holding a large mortgage.

If I held the mortgage that some people do, I wouldn’t sleep at night, even if the bank says it’s ok. People live in a bubble where they believe that interest rates will stay low forever and that real estate never decreases in value.

Both were proven wrong this summer in Toronto, as the average home price dropped by $175,000 and the bank of Canada raised interest rates by .25 of a percent (that equals an added $12/month on every $100K of a mortgage).

So, even though it might suck watching other people buy a first home while you’re left wondering how they do it, losing sleep over being mortgage broke (and house poor) is a much worse fate.

“The last mortgage I applied for I asked the banker, after I had been approved for a smaller amount ,’What’s the max you can give me, just for curiosity sake?’ He told me how much I qualify for and then said, ‘But honestly, I don’t know how you feed your family with that much mortgage.’ Just goes to show you, what they can lend, and what you can afford are miles apart.”

There’s an increasing number of young people today who are getting substantial help from their parents to buy a home:

Typically those benefiting from this won’t volunteer that information, but it’s true.

A combination of, (1) housing that is unaffordable and (2) a stock market that’s been less than stellar, is creating a situation where parents might feel there are multiple benefits to subsidizing a home purchase for their children. Most people feel comfortable with real estate as an investment, especially when holding for the long term.

So, the parents fork out some of their retirement money for a home and they end up getting a fairly stable long-term investment, while at the same time getting their kid out of the house so they can enjoy their golden years.

It’s also possible that some people who own homes have lower expectations than you, and bought a smaller home in a cheaper neighborhood:

Many of us want our first home to look like the house where our parents live. The problem with this, our parents took a long time saving to afford a home like that.

Let’s face it, smaller houses in less expensive neighborhoods, that aren’t renovated with a nice modern look, are simply cheaper. Many people looking for their first home don’t realize that it’s ok for your first home to be a smaller dated home that needs a little TLC.

In the long term, realizing this can put you much further ahead. Check out my upcoming post “6 Ways to get a better deal on your next home” for ideas on how you can get into a home for the best price and create a situation that will fast track you to being in the home you really want.

Regardless of the reason, other people have been able to afford to buy a house, remember their situations really have nothing to do with you. Your situation is the one you need to focus on. At Millennial Homeowner, we’re going to do everything we can to help you get into the right home for you while keeping you in a financial situation that’s comfortable and not costing you any sleep. Stick with it and together, we’ll get there. 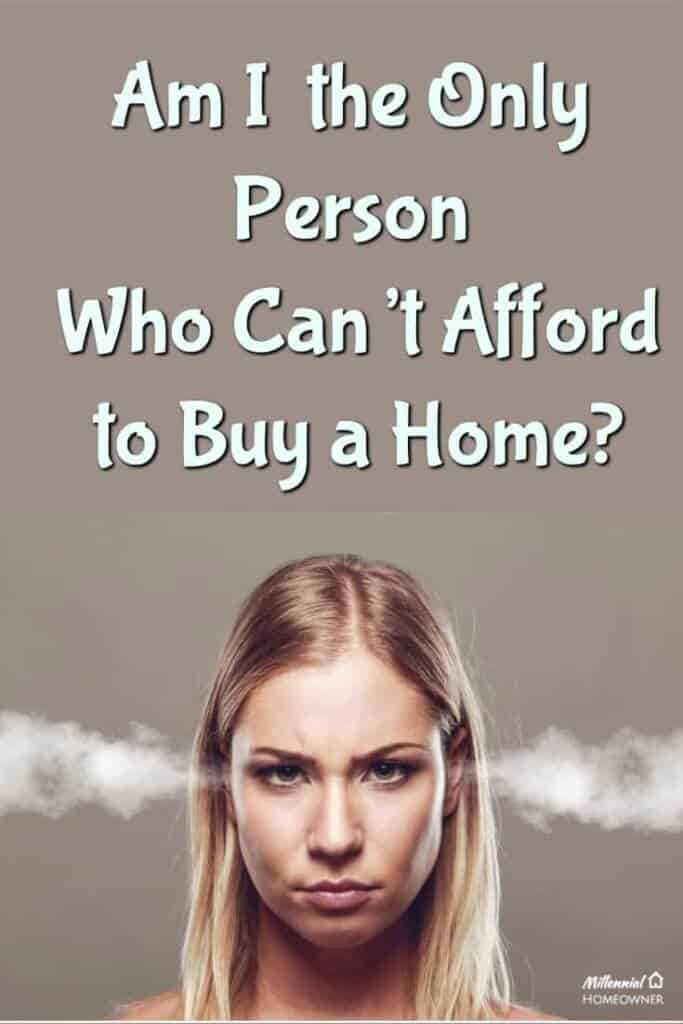