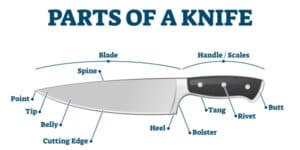 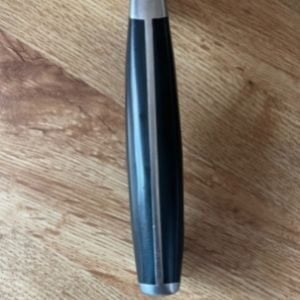 There are 11 parts of a kitchen knife, split up into two main areas, the blade and the handle. The handle is where you grip the knife and can come in many shapes and looks. There are many common handle materials. There are wood handles, pakkawood handles, plastic and metal knife handles. 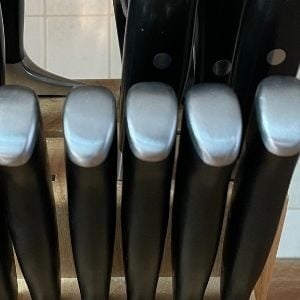 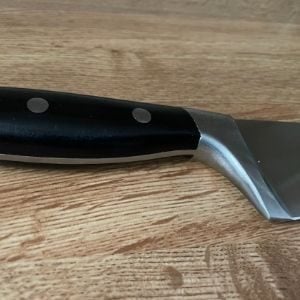 The tang of a knife is where the metal from the blade goes into the handle covering. There are full tangs and partial tangs, and false tangs.

In the image above you can see that this is a full tang knife. Meaning that the metal runs all the way through the knife handle.  Full tang knives are better because they have more strength and are considered better knife construction. Quality kitchen knives will usually have a full tang unless it’s a partial tang for usage purposes.

A partial tang is when the tang only goes part of the way into the blade of the knife and used more with delicate knives that require more accuracy when cutting like a filleting knife. The last type of tang is a false tang and these are usually a hidden tang that is used in low priced knives and don’t offer much support to the blade or the durability of the knife itself. We’ve had these in the past and the blade will often pop out of the handle. 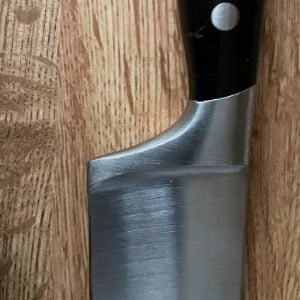 The bolster of a knife is the thick part of the blade of the knife that provides an easy transition from the blade to the handle. Not all knives will have this. They are usually dull and serve as a stopping point for your handle grip. They are common on knives with a full tang. 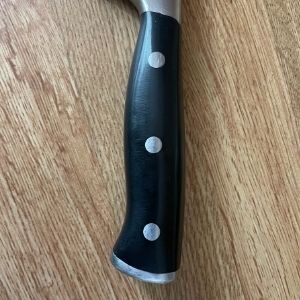 The rivets on a knife handle are used to secure the handle to the blade to prevent them from separating. If a knife handle is molded, as is with several knife makers, there is no need for rivets. Rivets on knife handles are commonly associated with a higher-quality knife.

Parts of a Blade of a Knife 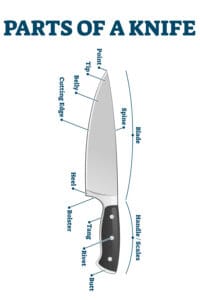 The blade of the knife is more important than the knife’s handle, typically when you are looking at knives. The blade is a piece of steel that serves for cutting. It can be stamped or forged depending on the quality and the knife maker. The metal that is used is very important as well as its Rockwell Hardness Scale (RHS). The harder the knife the longer the knife can keep its edge. 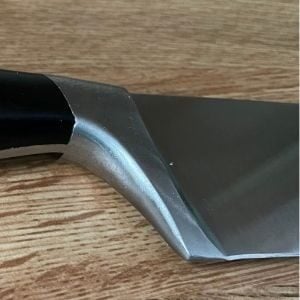 The spine is the top of the knife blade. Unless you have a double-edged blade the spine of the blade will be dull and thicker than the cutting edge. This is not a sharp part of the blade.

This is the sharpest part of a knife and comes in a variety of different metals depending on the manufacturer and the location of the metal. The cutting edges in the center is the most used part of the knife for cutting. 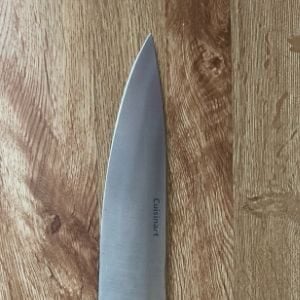 The belly of a knife is the rounding or curving part of the blade where the cutting edge rounds to the tip of the knife. This can be used to rock the knife for a style of cutting. Some knives will not have a belly like the Japanese nakiri knives and meat cleavers. 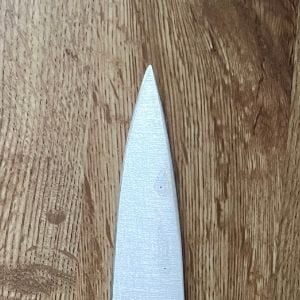 This is contrary to what many think, the tip of the knife is not the very pointed tip, which is called the point of the knife (see next). 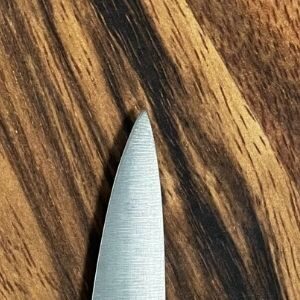 The point of the knife is the pointed part at the end of the knife where the spine and the cutting edge meet. All types of knives will have a point where the piece of metal comes to a point.

Looking for a type of knife or knife review? We have lots! Read these now that you know about the parts of a knife.